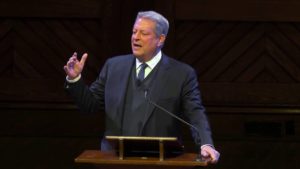 Sponsored by the Harvard Global Institute and the Harvard China Project, former VP Al Gore delivered a public lecture to a capacity crowd in Harvard University’s Sanders Theater on April 7, 2016. He expressed optimism about progress in low-carbon energy developments and the roles played by the U.S. and China. This lecture is the first … Read more

Lee Cowan interviews the former Vice President and Nobel Prize-winner Al Gore on his second career as an advocate against climate change – and against climate change deniers. Gore, who is featured in a new documentary, “An Inconvenient Sequel: Truth to Power,” talks about his efforts to sway President Donald Trump to maintain America’s participation … Read more